Do Not Have a Plan for This, It Will Only Cause Anxiety: Fulbright Orientation Day 2


When I was finally dozing off to sleep last night after 1:00 a.m., I was amazed at how shockingly quiet it was. Then 6:00 a.m. arrived and the street below came to life with all the enthusiasm only an orchestra of garbage trucks and work vehicles can provide. I stayed in bed until after 7:00, trying for cat naps, but finally gave up and gave in to some yoga, which only consisted of an 8-minute flow of various modifications/challenges to sun salutations. I moved to two songs only: Snow Patrol's "Just Say Yes" and Bruno Mars "Just the Way You Are."


I gathered my iPad, Fulbright folder, and camera bag and headed downstairs to the Senate room for breakfast: oatmeal, slivered almonds, sugared pecans, a dab of soy milk, an orange, and a spoon full of scrambled eggs sprinkled with Tabasco. I sat alone because all the tables were full, and I of course, was eating at the last minute (8:35, and it closed at 8:45.) Karen (teacher from Alaska) and I arrived at nearly the same time. She has an excuse though since she's still working on Alaska time, which is four hours behind the east coast.

We met at 9:00 to meet with the Chief of the Teacher Exchange Branch of the U.S. Department of State, Jennifer Gibson, who was a no-show due to an emergency at work. Awesome. I hope it was something James Bondish but with teachers. Hopefully we will get to meet her soon. She was followed by a beautiful woman named Edi, who did show, and she is the Vice President for Professional Exchange and Community Outreach. What I find fascinating about this experience is the respect and honor each person shows toward the Fulbrighters (I've learned this is what we call each other--Fubrighters--and we have already discovered we are "family.") The first thing each presenter did today was thank us for being there, thank us for being teachers, and congratulate us on the accomplishment.

Soon Craig Storti from Communicating Across Cultures took center stage for a session on The Art of Crossing Cultures. I think this was one of the most phenomenal public speaking sessions I've ever heard. He was so insightful, funny, and thoughtful with this words. A storyteller at heart. We took a

cross-cultural quiz: did you know that Norway ranks the highest of "most trusting of other people" with a score of 59? The USA ranks in at 41. The country that least trusts other people is Brazil. Storti reminded us that people are not out to frustrate us, and that all the behavior of others, though possibly illogical to us, is always logical to the individual based on their values, beliefs, and assumptions. Much of the time was spent poking fun (loving fun) at Americans. One of my favorite things he said was that the starting point for Americans is not reality, but reality plus. We never view things realistically, and will walk away or immediately try to cheer someone's gloom, because "we shouldn't be depressed, we should always be eternally happy." We role played through various conversations and then had discussions on the importance of face, the locus of control, management styles, rank and status, and communication styles. He reminded us that we don't learn from the easy, and he gave us tips on how to work through cultural differences, and to stay focused on what brought us to become Fulbright Scholars and to be working in the country we are living. He closed with this cute clip.


We worked our way toward lunch, which was a wonderful green salad and a plate of new potatoes, carrots, and steamed broccoli. Oh, and about four dozen chocolate covered strawberries and mini-cheesecakes.

Lunch was probably one of my favorite times today.
We had to sit with Fulbrighters from and going to the same country as us. I really got to know Steve, Becca, and Stacey. Stacey is going to London, but Steve, Becca and I are in the heart of England, Yorkshire County. Conversations were fun, and I've learned that Steve and I will get along splendidly. We placed two bets at lunch, both of which I lost. Not a good start. He's researching philosophy and how it's taught in the UK. He teaches in Boston at the high school next to Harvard. Becca is taking her two children with her to Leeds. She is from Tennessee and will study how the UK prepares students with special needs or disabilities for the living and working in the modern economy. I wish Stacey were going to be with us. She is so fun and is the Technology Coordinator for the Arkansas School of the Deaf in Little Rock. She will be surveying deaf educators in the UK on how they use mobile technology to serve deaf students. So neat. I cannot stop talking about or reading about the work of all of my colleagues here at Fulbright.

After lunch we sat with our country teams and listened to a panel presentation of previous Fulbright DA Teachers. Oh, and we also learned today that the U.S. Department of State has changed the name of this award, and this is the transition year. So, it is officially called the "Fulbright Distinguished Award in Teaching" as opposed to the "Distinguished Fulbright Award in Teaching."

The room where we met today was at least 55 degrees. I could see my breath. I drank 19 cups of coffee before transitioning to tea at the 3:15 p.m. break, and took a much needed step outside of the building to get a few minutes of sunshine.

I ate dinner tonight with Jode, and she and I planned a yoga meeting in the nearby park at 7:00 a.m. tomorrow. Dinner consisted of Caesar salad, spinach lasagne rolls and mushroom-stuffed grilled tomatoes. And more cheesecake.

I opted out of the bus tour of a few well-known D.C. sites, and instead cabbed it ($17) to the 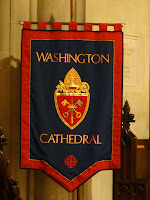 Washington National Cathedral. My cab ride took me right past the British Embassy. It was about 10 minutes away, but I missed the last ride up the observation tower. Sad for that. I was one of 10 guests in the building total, so Chris and Clay gave me personal tours of the outside and inside. I was fretting a little about not going on the bus tour, but this was exactly where I needed to be tonight. A little spiritual grounding often comes in a sacred space, and this is why I appreciate these old cathedrals because I do feel a sense of respect for an entity greater than us.

The National Cathedral has some phenomenal history, and Chris took me outside to show me damage from the earthquake two years ago, AND the Darth Vader Grotesque.

I went inside and browsed through the stories the stained glass windows told; the Space Window actually holds a piece of moon rock from the Apollo 11 mission, and a some of the pews were carved in England during World War II: one depicts a lion (England) holding a snake (Germany) in its mouth. The head of the snake is the face of Hitler. Just before close I sat down in  pew to participate in a closing of the day service. It was me and one other gentleman. We read prayers and psalms in unison. I went outside after and walked through the Bishop's Garden. Dusk didn't allow for pictures, but I was at the point that I didn't want to take any more. The space was becoming more to me than an image could represent.

I cabbed it back ($14) and had to stop at the concierge to tape a twenty dollar bill together that I somehow manage to rip exactly in half during the cab ride. I wrote and sent two postcards and drank a glass of red wine. It's nearly 11:00 p.m. and I'm wiped out from Day 2.

This is a professional teaching portfolio and a personal blog. Ideas and thoughts presented are not representative of the U.S. Department of State, the J. William Fulbright Program, or Republic R-III Schools.

Me, Fa, and Tche...dancing in Brazil

on the steps of the University of Marburg

A Journey through Brazil...

Me, Fernanda, and Tche

A Mixture of Life 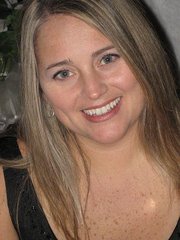 sisters by the blue spruce 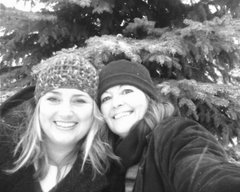 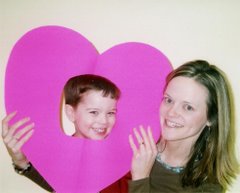 Landry and Melanie at their goofiest best! :)